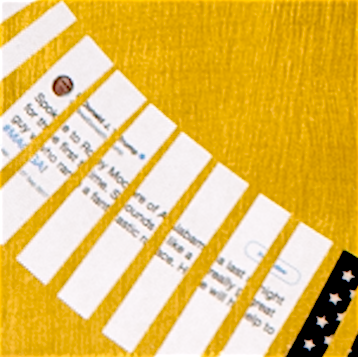 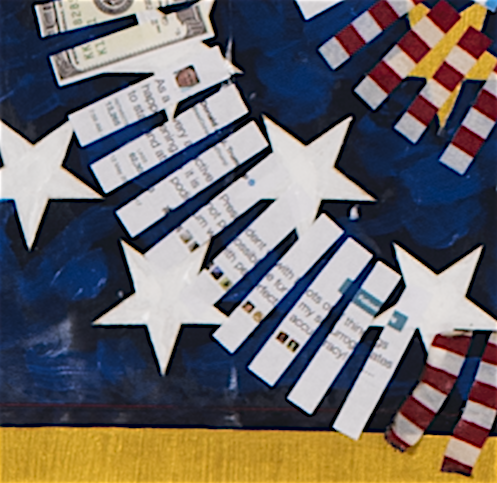 A friend called me excitedly last year out of the blue. “I have an idea for one of your spiral paintings. What if you did all of Trump’s craziest tweets?”

Reading every one of Trump’s tweets was the equivalent of being ball-gagged at a punishingly loud speed metal concert where all the musicians are naked junkie hookers screaming renditions of the Star Spangled Banner through terrifying face tattoos. Your sense of balance, humanity, decency and the future is destroyed and yet, you cannot look away, because you’ve never seen anything like it. And so began one of my most peculiar commissions.

Here is what I learned.

In our modern bully pulpit sound bite reality, everything you need to know you really did learn in kindergarten. And this guy learned none of it. Throughout the experiment, I kept asking myself, “What would I think if my 8-yr-old said that?” The answer was simple – I’d feel I was the worst parent in history, and my child was one of the rotten kids that should get unceremoniously bounced out of Willy Wonka’s chocolate factory.

The title of the painting, Like, Really Smart, comes from my very favorite tweet of all – “Actually, throughout my life, my two greatest assets have been mental stability and being, like, really smart.” Wait a minute … Is our president a 15-yr-old girl working at a Forever 21 in Encino?

I then realized that no self-respecting thug would leave his gilded penthouse without custom grills, so I painted him in a proper gold set on those pearly whites.

If you study this painting, you’ll notice our fearless leader’s democracy-destroying tirades radiate outward, literally warping the further they travel across the surface of an actual defaced US flag.

Old glory is upside down, cut to pieces and blistering in parts where the stars and stripes are no longer just red, white and blue but also gold, a nod to money’s hallowed station in Trump and Company’s to-hell-with-dignity-and compassion-just-show-me-the-loophole dystopia.

There were only so many tweets I could fit into 48×48″ but some so obviously reveal his true character, i.e. when he blindly extols the virtue of a known pedophilic bible thumping megalomaniac – “Spoke to Roy Moore of Alabama last night… Sounds like a really great guy… He will help to #MAGA!”

If my child sang the praises of a 30-yr-old man who thought that repeatedly getting in the pants of skeeved-out fourteen-yr-old girls was, like, just fine in the eyes of his Lord, not to mention the Senate, I’d rush my kid to a shrink and, while sitting in the waiting room during his session, I’d hit myself in the face with my shoe in disgrace for the entire 50-minute hour.

My buddy who commissioned this piece is a heavyweight in TV media, so he wanted me to focus on the Fake News meme. Trump kicked 2018 off with a real heart-warmer that basically said, Happy New Year everybody, especially you disgusting journalist people who write bad things about me. Now, there is a fine example of modeling hope and grace from the top. Were my own kids to send this note to their friends, colleagues (or 49 million followers), we’d enter the realm of Dickensian punishments – think tying them to a lamppost in the town square in their long-johns and lashing them with a buggy whip … then sending them to their frigid attic rooms without supper.

Listen, I have to admit that this guy is busy. Lots of stuff coming at him. He said it himself. “As a very active President with lots of things happening, it is not possible for my surrogates to stand at podium with perfect accuracy!” So, let’s assume my kid says to me, “Dad, so much happened today, with school and soccer practice and my playdate, how do you expect me or my friends to tell you the truth about stuff. It’s hard, you know?” To which I reply, “Is it, son?” as I Google military schools and orphanages.

Hard fact – Of his 49 MILLION FOLLOWERS, a great many of these folks believe Trump is DA MAN – strong, proven, willing to burn it all down, drain the swamp. Having just read through virtually every entry on the crazy train, I don’t see what they see. But I can count. And, while I’m no math whiz, I think the square root of 49 million is WE’RE DOOMED … unless a great number of people get off their lazy, complaining, binge-TV-watching asses and VOTE in these next elections. It’s really that simple – VOTE, YOU BITCHES and make sure everyone you know votes!

And if you need me, I’ll be in rehab trying to scrub these filthy tweet stains off my eyeballs.

It’s Such a Perfect Day*